Posted on June 23, 2014 by stuartrussellcomposer

At last I had got my hands on an Arturia Microbrute! This tiny, well made,  synth is quite something- there’s loads about this on youtube and countless other synth forums so I wont repeat whats been said and done on those, other than to say, you really have to give this a try if you’re looking for analogue sounds from a more modern perspective. Theres no presets, like most traditional analogue synths, however you are given a series of blank cards which fit on the surface over the controls so you can notate the position of all the knobs- (very low tech, but effective), there is a sequencer on board which does store your patterns on powerdown and there is a connection manager downloadable for free from the Arturia website which lets you upload your patterns to a computer via USB connection and gives you control over the sequencer features not detailed on the control panel, for example you can set the sequencer to hold note, default note lengths, legato options and trigger from incoming gate signals. 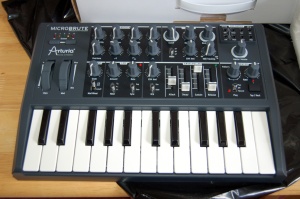 The bit thats quite modern is the synth architecture- a single oscillator but with Sawtooth, Sqauare and Triangle waveforms which can be simultaneously mixed. I last saw this on the Roland SH-101 but that only gave you two waveforms plus noise- not only are these three waveforms available but there is a suboscillator, which can be tuned up to a fifth, and the three waveforms have further options; the Sawtooth has an untrasaw knob, which effectively alters the width of the triangle part like a pulsewidth, the square has a standard pulsewidth control and the triangle has a “metaliser” knob which sounds like a form FM feedback, creating definite metallic tones. For a sound artist these combinations create some particularly striking effects, with the added bonus that they can be patched either by the LFO or modwheel or by another CV device via the patchbay in top right hand corner.

The filter also has some interesting options; its a Steiner-Parker design giving Higpass, Lowpass, Bandpass but also features a “Brute factor” knob which is in effect a feedback loop from the front end into the back end of the filter. The filter is also very powerful, will cutoff to nothing and self oscillate happily adding all sorts of harmonics in the process. Add reverb to this device and it becomes very much a great resource for anyone wanting to experiment with analogue sound.

This device can be bought new for around £250